May 30, 2014 · by ChessBeijing · in Chess
Article and photos by Victor Vitkov

Chess Beijing successfully hosted its first official tournament this past Saturday. More than twenty players participated in the event, which began at 9:30 in the morning and took place at Café de la Poste.

The time control on each clock was twenty five minutes, and the players were divided into five separate groups of four, each player facing off against all others on their group in a game of rapid chess for the right to move on to the second round.

As the players navigated their way through the first round of the tournament, the morning hours passed, and once the afternoon had arrived, the chess boards came off the tables in order to make room for lunch, which was provided by Café de la Poste. 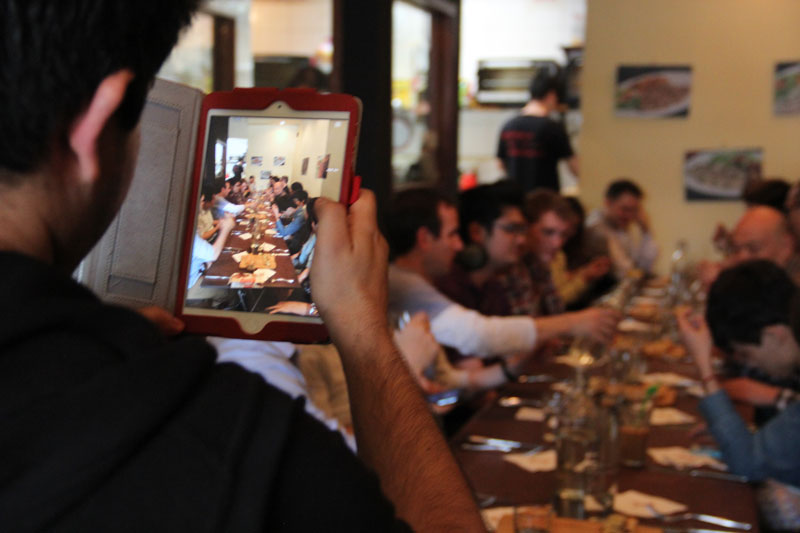 The meal began with appetizers consisting of bacon, eggplant and tomato tartines, before moving on to the main dish – the cafés famous T-Rex steak, made of the most tender meat the kitchen has on offer.

After taking the opportunity to mix and mingle over lunch, the players then reconvened around the chess board, and one by one, the winners of the first round emerged, with Milen Marinov, Hu Ze Hua, Ms. Gu, Yuan Qingshu, and Grand Master Lu Shanglei all continuing on to the second round.

As others spectated, the remaining players continued the battle, which concluded after GM Lu Shanglei emerged from the final bout as the winner of the tournament.

As others applauded, Chess Beijing co-founders Katun Luc and Tristan Macquet initiated the awards ceremony, where they delivered their concluding remarks and congratulated all who participated in the tournament.

Hu Ze Hua was awarded Giulio Cesare Polio Prize, which was generously provided by the Italian Embassy. (Giulio Cesare Polio was a great Italian chess player in the 16th and 17th century)
Milen Marinov, Ms. Gu, and Yuan Qingshu were each awarded professional tournament boards and clocks, while the top prize, a free dinner for two at O’steak, was awarded to GM Lu Shanglei.

“The tournament was a great success,” says Luc. “The event garnered a huge amount of interest from Beijing’s chess community, and we look forward to following up with a second tournament planned for later in the year.”

Chess Beijing would like to thank everyone who participated in the event, and special thanks go to our friends and sponsors at the Italian Embassy, O’Steak, Akryl, and Café de la Poste for their generosity.

Chess Beijing meets every Saturday at 3pm at Café de la Poste. Amateurs and grandmasters alike are all welcome to join.